Whales and dolphin live in an acoustic world. They use sound to communicate, navigate and find food.

Sound is much more important to them than vision. In the clearest ocean water you can see about 60m – on land we would think this a dense fog. Yet sounds, especially the low-frequency sounds made by whales, travel up to hundreds of kilometres. Our acoustic equipment is much more primitive than theirs, but we’ve successfully tracked sperm and humpback whales from more than 50km away.

We build our own hydrophones (underwater microphones) so that we can design them for specific tasks.

Consistent with our non-invasive philosophy, we use passive acoustics (listening to and recording the sounds that whales and dolphins make) rather than active acoustics (putting high-energy, human made sounds into the water).

We’ve used a range of acoustic methods, including moored acoustic event recorders (T-PODs) and bottom mounted recorders (DSG-Ocean), single hydrophones deployed from boats, towed stereo hydrophone arrays, and arrays of multiple hydrophones. The main value of using a hydrophone array is that you can not only record the whale’s sounds, but you can calculate where the sounds are coming from. That allows us to track vocalising whales and determine which whale is vocalising. Again via our collaboration with Otago University, we can record a full range of sounds from the lowest sounds made by blue whales (~20Hz) to the highest frequencies made by dolphins (>200kHz). 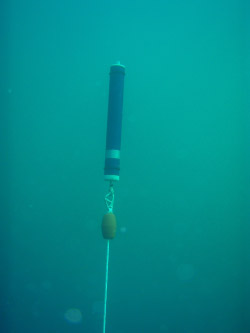 (On the right:) This is a T-POD moored in Doubtful Sound. It is an echolocation detector that can be tuned to specific frequencies to suit different dolphin species. It is a great way to find out when dolphins use particular places.

We use acoustic methods to study:

A great deal of our acoustic work is to find out how whales and dolphins use their habitat, in order to better protect the habitat that is crucial for them. A recent example is that we moored three echolocation detectors in Akaroa Harbour, at Banks Peninsula, to find our how the dolphins use the harbour day and night, year-round. One important component of this was to see whether and how often Hector’s dolphins use the upper harbour area which is open in amateur gillnetting from 1 March to 1 November each year.

We found that while the dolphins certainly use this area less in winter than in summer, they still use it on 41% of the days on which gillnets are allowed to be used. 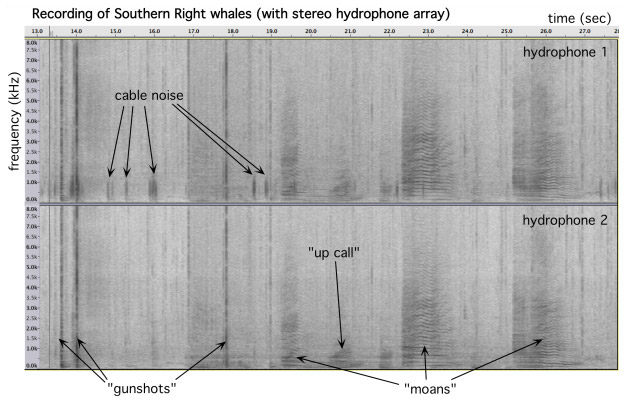 We also use sounds to study communication in whales. This is part of a recording from right whales, made in Port Ross, at the Auckland Islands. The “gunshots”, “up-calls” and moans are normal sounds made by the whales. The marks you see on the top trace, but not the bottom one, are caused by cable noise (e.g. cable banging against the side of the boat), and hence are recorded much more strongly on the closest hydrophone. With two or more hydrophones you can calculate the direction the sound came from, and figure out which whale made it. 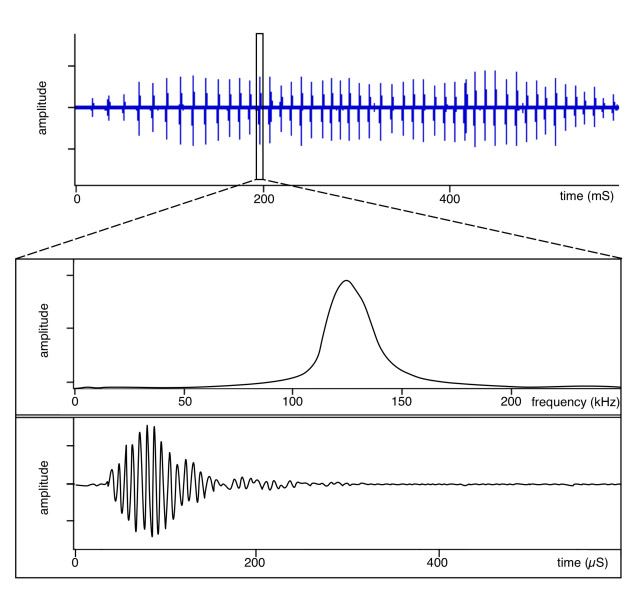 We’ve also studied the high frequency sounds made by Hector’s dolphins. These echolocation sounds are used by the dolphins to find their way around and hunt fish. They make sequences of click sounds (the top trace shows 49 individual clicks made in 0.6 of a second). From the echoes the dolphins can tell how far the target is, and what it is (e.g. fish, seaweed). The bottom trace shows one click in detail. You can see that it is very short (about 120 micro-seconds; about 1/8000th of a second), and centred on about 125 kHz (about 6 times higher than a human can hear). These sounds are used also in communication. These are the sounds that we set the T-PODs to log automatically.