Please help us save Maui and Hector’s Dolphins!

Please help us save Maui and Hector’s dolphins!

They are rarer than kiwis and continue to be threatened by fishing nets.

They are Endangered due to deaths in fishing nets – gill nets and trawl nets. Maui dolphin is Critically Endangered because there are fewer than 50 Maui dolphins left in the world. The last population estimate, of 57 dolphins (1 year and older) is about 4 years out of date. This is less than 5% of the original population size.

Maui dolphin is teetering on the brink of extinction and Hector’s dolphins are continuing to slide in the same direction. With about 10,000 individuals today, the South Island Hector’s dolphin population below 30% of its original numbers. To make matters worse, the population is highly fragmented into small local populations and fishing nets are removing these populations one at a time. Areas where they used to be very common are now without NZ dolphins.

We know that removing fishing nets from their habitat makes a huge difference. At Banks Peninsula, gillnets has been banned up to 4 nautical miles from shore since 1988 and trawling up to 2 nautical miles since 2008. Trust researchers have found that this has increased their survival by more than 5%. The Banks Peninsula dolphin population had been declining at 6% per year and is now almost stable.

Extending protection to all waters up to 100 m deep would allow Hector’s and Maui dolphins to recover.

Haven’t we saved them already?

Not yet! Slow progress has been made over the last couple of decades, but we are still a long way from saving these endangered dolphins. A recent improvement in dolphin protection was a compromise decision and doesn’t go far enough to save the smallest, most vulnerable populations – including the dolphins in Porpoise Bay, on the southeast corner of the South Island, off Otago and the east coast of the North Island.

The Ministry for Primary Industries (MPI) usually follow a “Maximum Sustainable Yield” approach for dolphin protection, as they use in fisheries management. This consists of estimating the maximum number of dolphins that can be killed without driving Hector’s or Maui dolphins extinct, with the smallest possible reduction in fishing industry profits. MPI advised the Minister of Fisheries to focus on areas where the greatest number of dolphins is being killed. These are mostly areas with still relatively large dolphin populations like Banks Peninsula. This approach ignores the risk to the smallest, most vulnerable populations. These will continue to decline, further fragmenting the dolphin population – eventually putting the whole species at risk.

The biggest ‘gap’ in protection is the very low level of protection from dolphin deaths in trawl fisheries. This will certainly minimise the financial cost of dolphin protection to the fishing industry, but also minimises the benefit for the dolphins.

Where are we now? 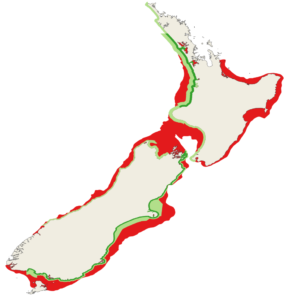 What needs to be done? 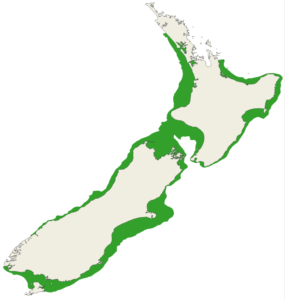 Much better protection is needed to allow NZ dolphin populations to recover from the rapid population declines of the last three decades.

A sustainable solution would be to ban gillnets and trawling throughout Hector’s and Maui dolphin habitat – as recommended by the IUCN and International Whaling Commission.

Comparing the two maps shows that we still have a long way to go, to save New Zealand’s own dolphins.

Maui dolphins are on the brink of extinction, with only about 50 individuals left. Experience with the baiji (Chinese river dolphin) and vaquita (Mexican porpoise) show that when you get to such a low population size, a species can suddenly go extinct. To avoid extinction of Maui dolphins, and to ensure NZ dolphins don’t keep sliding towards extinction, we need to extend protection to all waters less than 100 metre deep.

Throughout NZ dolphin habitat, we need to:

Find out more on what you can do to help save Hector’s and Maui dolphins.

Their social system is described as ‘fission – fusion’. In other words, if two groups of dolphins meet, they don’t necessarily split up into their original groups again but may go on to form new and different groups when they go their separate ways.

NZ dolphins eat red cod, yellow-eyed mullet, stargazer, squid and a range of other species. We know that from examining the stomach contents of dolphins that were found dead on beaches or caught in fishing nets.

Like most dolphins, NZ dolphins have a very slow reproductive rate. A female can expect to have her first calf when she is 7 to 9 years old, and she will have one calf every 2 to 4 years after that. They only live to about 25 years. That means an overall population growth rate of about 2%. In other words, a population of 100 NZ dolphins can grow by 2 individuals at most in any one year. That makes them very vulnerable to human impacts.

Dawson, S., Northridge, S., Waples, D., & Read, A. J. 2013. To ping or not to ping: the use of active acoustic devices in mitigating interactions between small cetaceans and gillnet fisheries. Endangered Species Research, 19(3), 201–221.

Dawson, S.M. 1994. The potential for reducing entanglement of dolphins and porpoises with acoustic modifications to gillnets. Reports of the International Whaling Commission. Spec. Issue 15: 573-578.

Dawson, S.M., and Slooten, E. 1993. Conservation of Hector’s dolphins: The case and process which led to establishment of the Banks Peninsula Marine Mammal Sanctuary. Aquatic Conservation 3: 207-221.