Southern right whales used to be so common in New Zealand that people in Wellington complained of being kept awake at night by the noise of the whales.

Right whales are seen occasionally off the mainland New Zealand coast, usually in small numbers. These sightings appear to be becoming more common. The New Zealand population is thought to be increasing at about 5% per year, slightly slower than right whale populations off South Africa and South America. 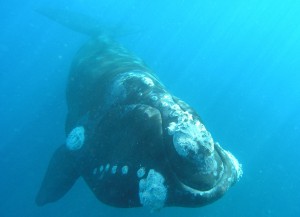 The southern right whale or tohorā is a large, stocky, distinctive whale with no dorsal fin and a v-shaped blow. Right whales have callosities (rough growths of keratin on their heads) which are uniquely shaped and allow individual whales to be identified. These callosities form patches along the top of their head, along their lips and on their chin and are infested with whale lice (cyamids) which feed on the rough, dead skin. Right whales are filter feeders, sieving high densities of tiny creatures, such as copepods, from the water using their 2-3 metre long baleen plates.

Southern right whales are migratory, spending summers offshore feeding and winters inshore breeding and calving. Currently the subantarctic Auckland Islands are thought to be the primary calving ground in NZ waters. Whales congregate in the shallow, sheltered waters of Port Ross to give birth and nurse their calves. Right whales are remarkably long-lived, likely reaching 100+ years old. Females typically have a single calf every three years once they mature at ~ 9 years old. The calves grow very quickly due to their diet of rich, fatty milk.

As with all marine mammals, sound is extremely important for southern right whales as a means of communication. Right whales produce a wide range of low frequency calls including moans, impulsive gunshot sounds, upcalls, downcalls and noisy blows.

Since their protection in 1935 and the cessation of whaling, southern right whales in New Zealand waters have faced minimal conservation problems. But this is no reason for complacency, it is likely that once these whales re-colonise former habitats, particularly those along the mainland coasts overlapping with human activities, the potential for adverse impacts will increase.

We can learn much from the harsh lessons with the North Atlantic right whale. A close relation of the southern right whale, the 400 whales in the North Atlantic have suffered 24+ deaths from ship strike since 1970 and over 75% of live whales have scars from entanglement in fishing gear. Their effective area for communication has also been reduced by 90% over the last 100 years due to noise pollution. The whales modify their calls when ship noise is loud by shifting their frequency and calling less often. Additionally there are the cumulative impacts of pollution, ecosystem effects of fishing and climate change.

One focus of our research is to provide an accurate estimate of the current population and the rate of population recovery. Using whaling records and current habitat preferences at the Auckland Islands we will also predict which areas in New Zealand are likely to be preferred habitat for the whales. This research will enable us to be proactive when managing this recolonising population by predicting where threats are likely to be greatest (e.g. plans for marine farms and other human activities in the whales’ habitat and migration routes). Focusing our research on understanding different right whale sounds, understanding the context in which they are made and examining background noise, will also help us to understand the significance of acoustic pollution and its potential impact on right whale recovery.

By finding out more about the recovery of New Zealand’s southern right whale population and their habitat preferences, we will also be able to provide management advice. This will help ensure that protection is implemented in a positive and proactive way, minimising conflict and avoiding the impacts faced by other right whale populations.

Our goal is to reduce the overlap between southern right whale habitat and potentially harmful human activities in the coastal zone. Some examples for minimising impacts on whales include:

In the North Atlantic, for example, there has been great success in reducing ship strike by modifying shipping lanes very slightly to avoid areas of high whale density.

New Zealand is part of an embarrassing 8% of the IUCN Resolutions that have still not been implemented. As you can see in the Director General's report (link below), presented a few days ago at the World Conservation Congress. The vast majority of the IUCN's Recommendations have been acted on by the relevant governments. But New Zealand has steadfastly ignored the IUCN's Recommendation to fully protect its endangered dolphins. ... See MoreSee Less

Still no progress on the Hector's and Maui dolphin Resolution. In 2012, the IUCN urged New Zealand to "urgently extend dolphin protection" by "banning gill net and trawl net use from the shoreline to the 100 meter depth contour in all areas where Hector’s and Maui’s dolphins are found, including harbours". ... See MoreSee Less

Working with Cath Wallace and Barry Weeber from ECO made it possible to cover most topics and most sessions of the IUCN conference. It would have been impossible for one person to cover all of those discussions.ECO are the bomb! Very effective input from Barry and Cath into many of the critical Resolutions at the conference. ... See MoreSee Less

Since 1976 ECO has been the umbrella group for environment and conservation organisations in New Zealand. This website has information about ECO and its 60+ member groups as well as news of the enviro...
View on Facebook
· Share

The IUCN World Conservation Congress finished early this morning. I participated online, for obvious reasons. Quite a marathon because the meetings went from 7 pm to 7 am, New Zealand time, most days for about a week. A 20-hour shift yesterday from 4 am to midnight. Many excellent talks and IUCN Resolutions, including protecting half the planet, creating an international Climate Commission and making progress towards a quiet ocean with less human-made noise. ... See MoreSee Less

The Programme includes all official sessions within the Forum, Members’ Assembly and Exhibition components of the IUCN World Conservation Congress. The Official Programme of sessions is available, a...
View on Facebook
· Share

Several news items in the last few days about the devastating decline of Maui dolphins, including this podcast. ... See MoreSee Less

According to the latest estimate, there are only 54 māui dolphins remaining. Only found on the North Island's west coast, māui dolphins are threatened by fishing pressures, like trawling and gill ne...
View on Facebook
· Share