The Trust’s founders, Steve Dawson and Liz Slooten, have been members of the IUCN Cetacean Specialist Group since 1990. They are also regularly invited to contribute to overseas workshops. The most recent, in October 2011, was “Techniques for reducing Marine Mammal-gillnet Bycatch”, in Woods Hole, USA. Steve chaired one of the working groups and Liz chaired another.

In 2004 Steve and Liz won the NZ Royal Society’s Sir Charles Fleming Award for “very significant contributions to the conservation of marine mammals in New Zealand, most notably but not exclusively the endemic Hector’s and Maui’s dolphins”. This award is given every three years in recognition of leadership in conservation science, including communicating scientific information to the public and decision makers.

The Trust is very active in the communication of science to the lay public. Our outreach has included 2 popular books, more than 30 magazine articles, well over 60 public talks, and more than 40 presentations to school, community or industry groups. In the last decade Trustees have written or been interviewed for over 60 articles in newspapers, magazines or TV items. Many of the photographs, much of the information, and all of the sounds used in the Te Papa (Museum of New Zealand) whale and dolphin exhibit come from our work.

Trustees play important roles in maintaining quality in scientific publishing. Steve is an editor of “Marine Ecology Progress Series” and Liz is an Editor of “Aquatic Conservation: Marine and Freshwater ecosystems”. Both journals are peer-reviewed scientific journals of high standing.

In 2012, Steve was awarded a University of Otago Award for Excellence in Teaching. This Award not only recognises classroom teaching but also outreach, and it shows our dedication to communication of science. 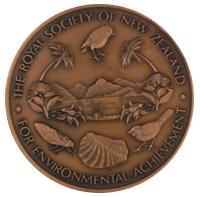